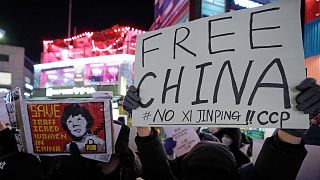 Young Ukrainians rebuild destroyed homes in the village of Horenka

Hundreds of protesters gathered outside the Chinese consulate in New York on Tuesday, echoing a wave of demonstrations against Chinese authorities' restrictive “zero-COVID” policy that has swept across China.

They chanted slogans in both English and Mandarin including "We don't want dictatorships, we want elections!" and "Step down, Xi Jinping".

Chris Tang said some events on university campuses and the city’s streets had attempted to incite others to target China’s central government in the name of commemorating a deadly fire in the country’s far west last week. “This is not a coincidence but highly organized,” he told reporters at the legislature.

Protests erupted in major mainland cities over the weekend after the blaze that killed at least 10 in Urumqi, the capital of the Xinjiang region, prompted angry questions about whether firefighters or victims trying to escape were blocked by COVID restrictions.

Dozens of Uyghur demonstrators gathered outside the Chinese consulate in Istanbul Wednesday to protest a fire last week in China’s northwestern Xinjiang region that killed 10 people and injured nine.

The fire in an apartment building came amid stringent lockdowns that have left many residents in the area stuck in their homes for more than three months.