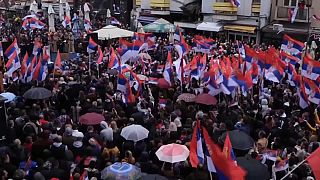 Several thousand ethnic Serbs rallied in Kosovo on Sunday as a dispute over vehicle license plates heightened ongoing tensions between Serbia and its former province.

Several thousand ethnic Serbs rallied in Kosovo on Sunday as a dispute over vehicle license plates heightened ongoing tensions between Serbia and its former province.

The government's decision to gradually ban Serbia-issued license plates has angered Kosovo Serbs, most of whom do not recognise Kosovo's 2008 declaration of independence.

The Serbian government, with support from China and Russia, has also refused to acknowledge Kosovo's statehood. The United States and its allies recognise Kosovo as an independent country.

During Sunday's protest in the northern Kosovo town of Mitrovica, Serb political leaders said the police officers, judges, and other public employees would not return to their jobs unless Kosovo's government reversed its license plate policy.

“We are on our land and we will not give up,” Serb politician Goran Rakic said.

“There is no withdrawal. Long live Serbia.”

The issue of Kosovo's independence sparked a 1998-99 war, in which some 13,000 people died. Serbia launched a brutal crackdown to curb a separatist rebellion by ethnic Albanians. NATO bombed Serbia in 1999 to end the war.

Both Serbia and Kosovo have been told they must normalise relations in order to advance in their effort to join the European Union. However, EU-mediated talks have stalled and the latest tensions spark concerns of instability more than two decades after the conflict.