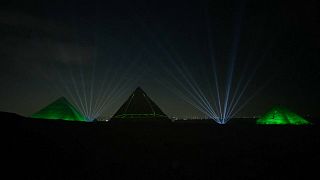 Egypt lights up the Pyramid of Khafre ahead of #COP27

Egypt lights up the Pyramid of Khafre ahead of #COP27

Egypt lit up the Khafre Pyramid, one of the three ancient pyramids of Giza, dating back 4,500 years, ahead of #COP27.

Egypt lit up the Khafre Pyramid, one of the three ancient pyramids of Giza, dating back 4,500 years, ahead of #COP27.

Egypt is taking over the COP Presidency as more than 40,000 international delegates are expected to come together to advance the world’s climate agenda by increasing ambition and accelerating climate action.

Envoys from around the globe gathered Sunday in the Egyptian seaside resort of Sharm el-Sheikh for talks on tackling climate change amid a multitude of competing crises, including the war in Ukraine, high inflation, food shortages and an energy crunch.

Notching up a first small victory, negotiators agreed to formally discuss the question of vulnerable nations receiving money for the loss and damage suffered from climate change after two frantic days of preliminary talks.

The issue has weighed on the talks for years, with rich nations, including the United States, pushing back against the idea of climate reparations.

"The fact that it has been adopted as an agenda item demonstrates progress and parties taking a mature and constructive attitude towards this," said the U.N.'s top climate official, Simon Stiell.