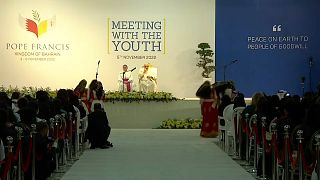 An estimated 30,000 people, some travelling from Saudi Arabia, Kuwait and other Gulf countries, packed the Bahrain national stadium for Pope Francis’ big Mass on Saturday.

An estimated 30,000 people, some travelling from Saudi Arabia, Kuwait and other Gulf countries, packed the Bahrain national stadium for Pope Francis’ big Mass on Saturday.

The English-language liturgy was geared toward foreign workers, with popular English hymns and prayers in Malay, Tagalog and Tamil while a priest offered English translations.

Francis is on the first-ever papal visit to Bahrain, a Sunni-led island kingdom the size of New York City that lies off the coast of Saudi Arabia.

After the Mass, Francis met with several hundred young people at the Sacred Heart School, which dates from the 1940s and is affiliated with the church of the same name that was the first Catholic church built in the Gulf.

Francis urged them to forge a future where such friendly interfaith relations remain the norm.

“Before you go to the internet for advice, always seek out good counsellors in life, wise and reliable people who can guide and help you,” he said, listing parents, grandparents or a spiritual guide.