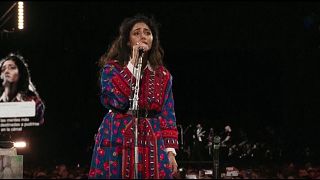 This week, a pedestrian bridge packed with revellers collapsed into the river below, killing at least 137 people, in India.

This week, a pedestrian bridge packed with revellers collapsed into the river below, killing at least 137 people, in India.

Personal items of the victims of the crowd surge that cost the lives of more than 150 people in Seoul's Itaewon neighbourhood were collected.

President Joe Biden and his wife, Jill, hosted the children of local firefighters, nurses, police officers and National Guard members for trick-or-treating at the White House on Halloween.

There has been jubilation and disbelief in Brazil over Luis Ignacio Lula da Silva's narrow election victory against Jair Bolsonaro.

And Coldplay was joined live on stage by Iranian actress Golshifteh Farahani at a huge concert in Buenos Aires. They performed the Iranian song "Baraye," which has become an anthem of the protests in Iran following Mahsa Amini's death.