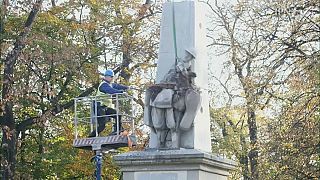 Four communist-era monuments to Red Army soldiers have been dismantled in Poland.

Four communist-era monuments to Red Army soldiers have been dismantled in Poland.

It’s part of a drive to remove symbols of Moscow’s post-World War II domination and to stress its condemnation of the Kremlin's war in Ukraine.

Karol Nawrocki, Head of the state historical institute called for them to be removed and said the obelisks stood for a system that was guilty of enslaving and murdering its own people and other nations, including Poles.