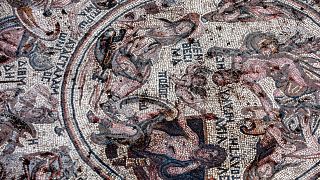 Syria uncovered a large intact mosaic that dates back to the Roman era, in the central town of Rastan, saying it is the most important archaeological discovery since the conflict began 11 years ago.

Syria uncovered a large intact mosaic that dates back to the Roman era, in the central town of Rastan, saying it is the most important archaeological discovery since the conflict began 11 years ago.

The mosaic, at 120 square meters (around 1300 square feet), was found in an old building that Syria's General Directorate of Antiquities and Museums had been excavating.

Lebanese and Syrian businessmen from the neighbouring country's Nabu Museum bought the property that dates back to the 4th century and donated it to the Syrian state.

Each panel was filled with square-shaped, small colorful stones measuring about half an inch on each side.

In Ancient Greek and Roman mythology, demigod hero Hercules slayed Hippolyta, queen of the Amazons, in one of his 12 labours.

The mosaic also portrays Neptune, Ancient Roman god of the sea, and 40 of his mistresses.

Syrian heritage sites have been looted and destroyed over the past decade of ongoing violent conflict.

Among the most notable incidents was the Islamic State group taking Palmyra, a UNESCO world heritage site that boasts 2,000-year-old towering Roman-era colonnades and priceless artifacts, and partially destroying a Roman theater.

Meanwhile, Syria's cash-strapped government have slowly been rebuilding Aleppo's centuries-old bazaar after reclaiming it from armed opposition forces in 2016.

Rastan was once a major opposition stronghold and was a point of intense clashes, before the Syrian government reclaimed the city in 2018.