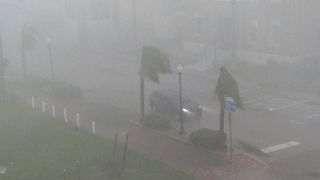 Hurricane Ian, one of the most powerful storms ever recorded in the United States, made landfall in southwest Florida on Wednesday, flooding city streets and breaking trees along the coast.

The storm slammed into the coast with 150 mph (241 km/h) winds and pushed a wall of storm surge built up as it slowly moved over the Gulf of Mexico.

About 2.5 million people were ordered to evacuate southwest Florida ahead of the storm's arrival, but the law prohibits forcing anyone to flee.

In Naples, the first floor of a fire station was inundated with nearly three feet of water and firefighters struggled to retrieve equipment from a fire truck stuck outside the garage in even deeper water, as shown in a video released by the Naples Fire Department.