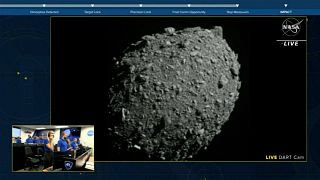 A NASA spacecraft slammed into an asteroid at breakneck speed Monday in an unprecedented dress rehearsal for the day a deadly rock threatens Earth.

The galactic grand slam hit a harmless asteroid located 9.6 million kilometers from Earth. The spacecraft, named Dart, hit the small space rock at a speed of 22 500 km/h. Scientists expected the impact to carve up the asteroids at 10 000 km/h.

Telescopes from around the world and from space aimed at the same spot in the sky to capture the spectacle. Although the impact was immediately obvious - Dart's radio signal abruptly stopped - it will take days, if not weeks, to determine how much the asteroid's trajectory has been altered.

The $325 million mission was the first attempt to change the position of an asteroid or other natural object in space.