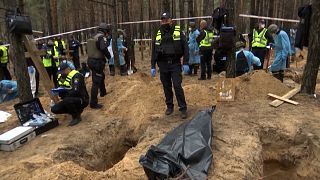 Identification of bodies at a burial site in the Ukrainian town of Izyum.

Ukrainian investigators descended on a pine forest outside the town of Izyum on Friday and began pulling hundreds of hastily buried bodies from the sandy soil.

Ukrainian authorities claim that more than 450 graves have been discovered in the area, which until recently was under Russian control, but the exact number of buried bodies remains unknown.