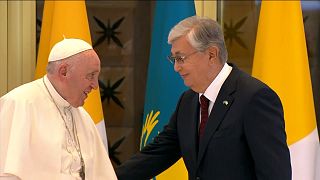 Pope Francis was welcomed by Kazakh President Kassym-Jomart Tokayev on Tuesday with an honour guard ceremony at the presidential palace in the capital, Nur-Sultan.

Pope Francis was welcomed by Kazakh President Kassym-Jomart Tokayev on Tuesday with an honour guard ceremony at the presidential palace in the capital, Nur-Sultan.

The pope, forced to use a wheelchair and cane because of his strained knee ligaments, is on a three-day trip to the former Soviet nation.

On Wednesday and Thursday, he will participate in an interfaith meeting with more than 100 delegations of Muslim, Christian, Jewish, Buddhist, Shinto and other faith groups from 50 countries.

Pope Francis had hoped his trip to Kazakhstan this week would offer a chance to meet with the head of the Russian Orthodox Church - who has justified the war in Ukraine - and plead for peace.

Patriarch Kirill bowed out a few weeks ago, but Francis went ahead with the trip that is nevertheless being overshadowed by Russia’s seven-month war.