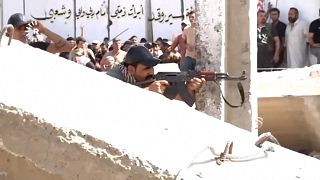 Tensions have soared in Iraq amid a political crisis that has left the country without a new government, prime minister or president for months, and escalated sharply after Sadr's supporters on Monday afternoon stormed the government palace following their leader's announcement that he was quitting politics.

At least seven shells fell in the high-security Green Zone, the security source said on condition of anonymity, but it was not immediately clear who was responsible.