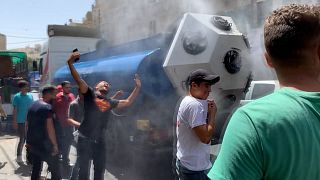 As the extreme heat wave that has ravaged Jordan has negatively affected life, the municipality of Amman has decided to spray water with the sprinkler method in the city center, in particular in commercial areas.

As the extreme heat wave that has ravaged Jordan has negatively affected life, the municipality of Amman has decided to spray water with the sprinkler method in the city center, in particular in commercial areas.

Municipal tankers will supply a number of main streets in Amman.

Amman Municipality spokesman Nasser Al-Rahamneh said water will be sprayed in the center of the city, especially in commercial areas.

As an additional precaution, the municipality of the capital, Amman, decided to prevent workers from working between 12:00 p.m. and 4:00 p.m. on Saturdays and Sundays.

According to the meteorological service report, Jordan was hit by a heat wave. Temperatures will rise significantly. Towards the end of the week, the scorching heat will take its toll. It is estimated to reach a record high of 7 to 8 degrees above seasonal norms on Sunday.

Jordanian citizens are warned not to go out during hot hours and to complete their work outdoors before temperatures rise.