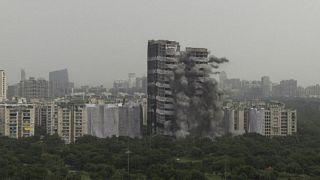 Near New Delhi, two residential towers were razed in a controlled demolition on Sunday after India's highest court declared them illegal for violating building rules.

Near New Delhi, two residential towers were razed in a controlled demolition on Sunday after India's highest court declared them illegal for violating building rules.

The 32- and 29-storey towers, which were not yet occupied, were the tallest structures to be razed in India.

The demolition followed a 12-year legal battle between local residents and the builder, Supertech Limited.

The Supreme Court ruled that the builder, in collusion with officials, had violated laws prohibiting construction within a certain distance of neighbouring buildings.

The towers were demolished by Edifice Engineering, in collaboration with Jet Demolition of South Africa, at a cost of 180 million rupees (US$2.25 million).

A partner in Edifice Engineering said that 3,500 kilograms (7,716 pounds) of explosives were drilled into thousands of holes in the columns and shears of the towers.

Removal of all the debris is expected to take three months.