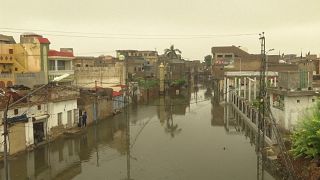 After soaking much of Pakistan's southwestern Baluchistan and eastern Punjab province, flash floods have now started to affect the southern Sindh province.

After soaking much of Pakistan's southwestern Baluchistan and eastern Punjab province, flash floods have now started to affect the southern Sindh province.

Authorities this week closed schools in Sindh and Baluchistan.

Pakistan's disaster agency said Wednesday that heavy rains have triggered flash floods and wreaked havoc across much of the nation since mid-June, leaving 903 dead and about 50,000 people homeless

Thousands whose homes were swept away now live in tents, miles away from their inundated villages and towns, after being rescued by soldiers, local disaster workers and volunteers.

Monsoon rains, which started in mid-June, were expected to continue this week, mainly in the south.

Floods have damaged as many as 129 bridges across Pakistan, disrupting the supply of fruit and vegetables to markets and causing a hike in prices.

Experts say climate change has caused erratic weather conditions in Pakistan, resulting in cloudbursts, and melting of glaciers that has swelled rivers.