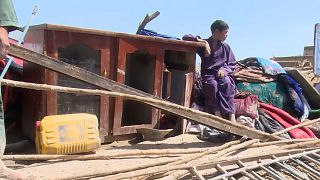 Flash floods caused by an unusually heavy monsoon have killed nearly 800 people across Pakistan since mid-June.

Rescue teams are racing against time to evacuate thousands of people stranded in safer areas.

According to a military statement, troops carrying food, tents and other essential items have reached almost all these remote areas where people are waiting for help.

The monsoon season runs from July to September in Pakistan.