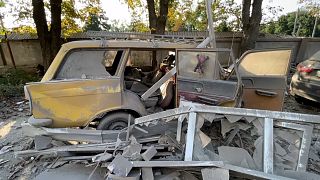 According to the Kharkiv regional police representative, five missiles hit different parts of the city in the early hours of Friday.

Several buildings were seriously damaged, including a Pirana household chemical factory and the National Technical University,

Ukraine's second largest city has been the target of regular Russian shelling since the beginning of the invasion, according to the regional police.

Russia says it is targeting a concentration of Ukrainian soldiers in the area.