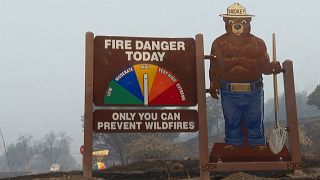 Buildings destroyed after the "Mckinney" fire in California

In recent days, a wildfire has ravaged the Klamath National Forest in California, destroying most of the homes in the area.

At least four people died in the fire. Their bodies were found in different residences outside the Klamath River.

The cause of the fire is not yet known.

More than 100 homes, sheds and other buildings have burned since the fire broke out on Friday.