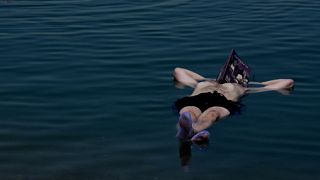 The 3rd edition of the Amman International Film Festival (AIFF) started on 20 July, with some 50 films from 29 countries participating.

A busy schedule for the jury members, who were seen enjoying a refreshing water break on the Dead Sea to consult the film catalogue.

Jordan’s first international film festival that showcases Arab and international movies was long overdue. The Jordanian local film industry has begun to show what it can do, with talented directors winning international acclaim.