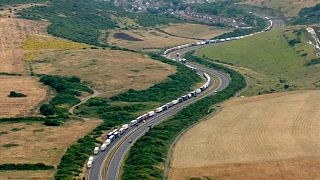 Britons heading off on holiday by ferry faced hours-long waits at the port of Dover on Friday, with UK authorities blaming French officials for the chaos.

Dover authorities said a lack of French border officials was leading to waits of up to six hours for border checks at the English Channel port, with queues of tourist and freight traffic snarling roads for miles (kilometres) around.

Port authorities said in a statement that the number of French border police “has been insufficient and has fallen far short of what is required to ensure a smooth first weekend of the peak summer getaway period.”

Since Britain left the European Union in 2020, UK citizens have face stricter border checks when travelling to the continent.