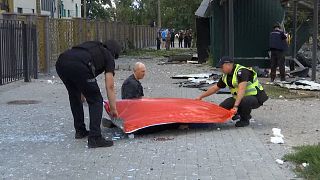 Three people, including a teenager, were killed on Wednesday in a Russian attack on a bus station in Kharkiv.

The boy's sister was injured and taken to hospital, the emergency service said. A 72-year-old woman was also injured.

The father of the 13-year-old boy sat on the ground on his knees next to his son's body and prayed.

The shelling was carried out with "Hurricane" salvo rocket systems, according to the Kharkiv regional prosecutor's office.

Under the procedural direction of the Kharkiv District Prosecutor's Office, a preliminary investigation was opened for violation of the laws and customs of war, combined with intentional killing, in accordance with the Criminal Code of Ukraine.