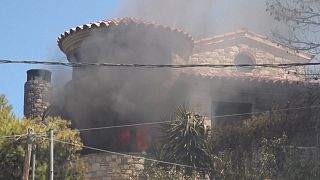 Greek firefighters took the lead on Wednesday in the battle against a forest fire that has been raging for two days in mountainous suburbs north of Athens and had already forced hundreds of people to flee.

Several buildings suffered varying degrees of damage as a result of the fire on Tuesday.

Citizens' Protection Minister Takis Theodorikakos said his officers had since Tuesday helped evacuate nearly 700 people to safety, noting that some had refused to leave.