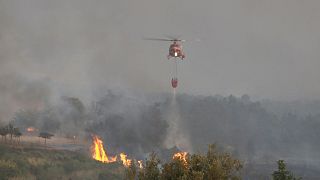 The wildfires have forced more than 14,000 people -- residents and tourists combined -- to decamp. Seven emergency shelters have been set up to take in evacuees.

Meteo France forecast temperatures of up to 40 degrees Celsius (104 degrees Fahrenheit) in parts of southern France on Sunday, with new heat records expected on Monday.

France placed 15 departments, mainly down its western seaboard, on red alert -- the highest on the scale -- on Sunday while 51 were on orange high alert.

The neighbouring chapel of a historic hospital in the southeastern city of Lyon, Grand Hotel Dieu, offered refuge to tourists on Sunday.