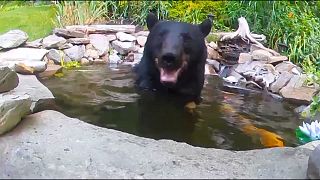 The bare necessities? Bear cools off in pond, scared away by koi carp

This is a story of a black bear who got into a backyard fishpond to cool off from the summer heat until the resident koi carp scared it away.

The bear entered the pond in the Massachusetts town of Pepperell, panting heavily as it soaked its fur into the water and quenched its thirst as koi carp darted around it.

Contact with the fish was too much for the bear and it lumbered away less than a minute and a half after it got into the pond.

Bears have repeatedly come to cool off in the fishpond in the summer and other wild animals make frequent visits to the backyard, prompting the homeowner to install security cameras to capture the action.