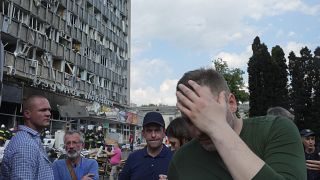 Fire and smoke after Russian strikes on Vinnytsia in central Ukraine

Missiles struck the city of Vinnytsia Thursday, killing 20 people and wounding 90 others in what Ukraine's president said was "an open act of terrorism" by Russia on the country's civilian population in areas with no military value.

The missile strike ignited a fire that expanded to engulf 50 cars in an adjacent parking lot.

Ukrainian President Volodymyr Zelenskyy said a child was among the dead. He suggested the attack was deliberately aimed at terrorizing civilians.

Vinnytsia is one of Ukraine's largest cities, with a population of 370,000. Thousands of people from eastern Ukraine, where Russia has concentrated its offensive, have fled there since the start of the war.

Before the missiles hit Vinnytsia, the president’s office reported the deaths of five civilians and the wounding of another eight in Russian attacks over the past day.

The news came as EU foreign and justice ministers prepared to meet in The Hague for a conference on alleged Russian war crimes.