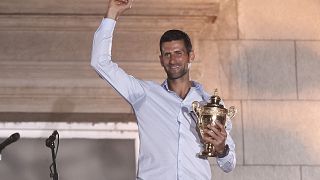 Novak Djokovic spoke of his pride at being able to share his latest Wimbledon success with his fellow Serbians.

The 21-times Grand Slam champion was given pride of place on a balcony at Belgrade City Hall, the day after his incredible four set victory over Nick Kyrgios in the Wimbledon men's final.

Djokovic addressed the crowd from the balcony and threw 20 signed tennis balls into the crowd.

The star said it is unlikely he will feature in this year's US Open as he continues to refuse to be vaccinated against coronavirus.