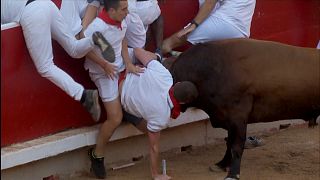 Seven people were injured and transferred to hospital during the fifth bull run of this year's San Fermin festival in Pamplona, three of them due to bull gorings. Two of those gored were in the bullring, while the other was gored in the alleyway leading to the bullring.The run featuring from Cebada Gago bull ranch lasted 3 minutes and 8 seconds because one of the bulls got separated from the pack in the bullring.

Cebada Gago is the bull ranch which has caused more injured due to bull gorings in San Fermín. In their 31 participations they have left 57 injured, an average of 1.83 per running of the bulls.

On the way down the alleyway, one of the red bulls turned back and caused several runners to run into it and two other bulls that were arriving at the same point

One of the most dangerous moments took place in the bullring, when the bull Marismeño, a red-coloured bull, impaled a runner for a few seconds while the young man tried to free himself trapped against the barrier.