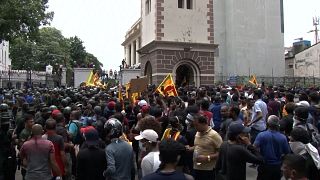 Sri Lanka's president and prime minister have agreed to resign, after tens of thousands of protesters have rocked the country's capital.

Moments after the prime minister made his announcement, protesters set his private house on fire.

Thousands of people were demonstrating in the capital Colombo against the island nation's worst economic crisis in recent memory.

Prime Minister Mahinda Rajapaksa was not inside the residence but footage shot on mobile phones showed a large number of people inside the well-fortified house and on the grounds outside.

A government spokesman, Mohana Samaranayake, said he had no information about the whereabouts of Rajapaksa after he left the residence.