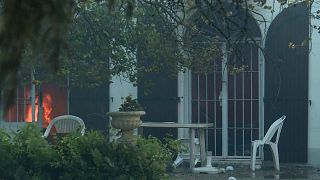 Several fires broke out on Thursday (7 July) in the Gard and Bouches-du-Rhône regions. Near Arles, a city on the Rhône River in southern France, some eight houses were affected, as well as stocks of goods.

In a house located in Arles , the fire brigade could do nothing. The owner discovered, powerless, the ravages of the fire. The flames first affected the trees, then the roof. Inside, a lifetime of memories disappeared.

Some 200 firefighters are mobilized, as well as four Canadair, whose operations are made difficult by the wind and high temperatures.

The large fire that has already burned more than 600 hectares of vegetation since Thursday evening in the north of the Gard "is still active" on Friday morning (8 July), according to the fire brigade, which is preparing for a new day of fighting with 700 men and women on site.