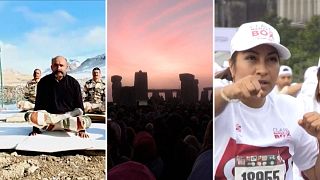 This week, crowds gathered at Stonehenge in southwest England to watch the sunrise behind the ancient monument on the Summer solstice.

People also gathered on that same day to celebrate World Yoga Day, even soldiers on the snow-capped mountain borders in India.

Brave swimmers took a dip in minus 19-degree Celsius temperatures - with the wind chill dropping to about minus 25. This traditional icy plunge at Mawson station took place to mark midwinter, a turning point in the calendar for those living on the frozen continent.

In Kharkiv, Ukrainian rescuers removed a 500-kilogram air-dropped bomb from the roof of a residential building. The bomb was dropped three months ago, but because of continuing shelling in the region, deminers couldn't remove the shell until now.

Women living in the city of Zaporizhzhia in southern Ukraine were seen learning to use Kalashnikov assault rifles as part of an urban combat training programme, preparing for a potential offensive by Russia.

Mexicans were also brought together to practice another combat sport: boxing. Some 14,299 people gathered in Mexico City to beat the Guinness record for the most crowded boxing class in the world. The figure surpassed the previous record held by Moscow, which in 2017 gathered around 3,000 people for a boxing lesson.