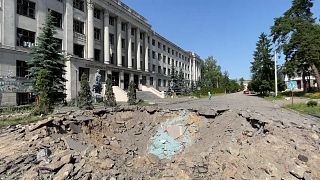 According to local authorities, a ballistic missile hit the premises of the Academy late at night.

The impact created a 2.5-meter (8.2 feet) deep crater. Eyewitnesses say that six powerful explosions were heard in Kharkiv and its outskirts during the night.

Police that were dispatched to the area confirmed that the Russians used Iskander rockets.