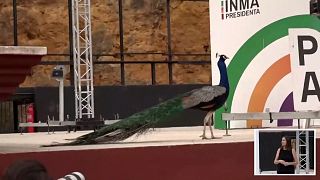 A peacock takes to the stage during a rally of the left-wing coalition "Por Andalucía" held in the city of Dos Hermanas, Seville province, in the run-up to the Andalusian regional elections on Sunday 19 June.

During the speech of the president of Más País in Andalusia, Esperanza Gómez, a peacock suddenly appeared on stage, calmly crossing in front of the lectern and provoking laughter from all those present.

The rally was held in the municipal auditorium located in the Alquería park, where the peacocks wander throughout.