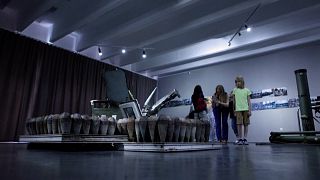 The war in Ukraine already has its own museum exhibition

The invasion of Ukraine by Russian troops is already being told in a museum.

Even as war rages in other parts of the country, Ukrainians are flocking to a new exhibition in Kyiv called "Ukraine - Crucifixion".

It features items recovered after the Russian army was forced to withdraw from areas it occupied around the capital.

Missiles, food rations, helmets and other objects left behind in the area north of Kyiv form the core of the exhibition.