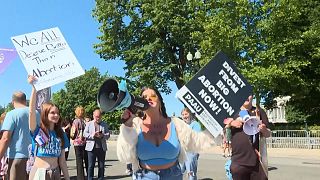 An abortion rights activist chains himself to the SCOTUS fence.

An abortion rights activist was arrested outside the Supreme Court on Monday after chaining himself to a perimeter fence to protest the court's expected ruling that would overturn Roe v. Wade and overturn the landmark 1973 ruling establishing abortion rights nationwide.

The activist, Guido Reichstadter, jumped over barricades before putting a metal chain around his neck and chaining himself to a fence outside the court.

He remained chained to the fence for about 15 minutes before the police, using bolt cutters, managed to cut the chain and handcuff him.

The case before the Supreme Court is the most important in generations, with a decision on the constitutional right to abortion in the US expected by the end of June.