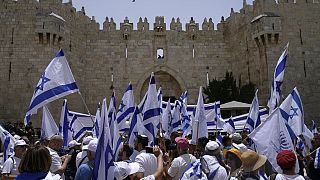 Jewish nationalists gather to celebrate ahead of the "Jerusalem Day"

Jewish nationalists gather to celebrate ahead of the "Jerusalem Day" march in Jerusalem. Israel deployed 3,000 police on the day that marks its 1967 capture of east Jerusalem, home of the Al-Aqsa mosque compound located on what Jews revere as the Temple Mount.

Palestinians in the West Bank city of Ramallah rally against Israel's "flag march" in Jerusalem. The march last year sparked unrest that led the Islamist armed group Hamas to fire rockets from the blockaded Gaza Strip, triggering an 11-day war.