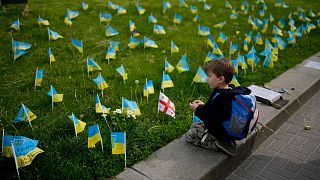 A giant queue formed outside the post office in the city when special anti-war postage stamps and postcards went on sale.

Hundreds of people gathered to buy stamps and postcards depicting an Ukrainian soldier putting up a middle finger gesture to a Russian warship.

A lawn in a square in the capital has been strewn with small Ukrainian flags, put out in tribute to those who have lost their lives since the fighting broke out on February 24.

A monument displays the message "Ukrainians killed by (Russian President Vladimir) Putin" with the number 7,463 written below.

Since Russia's withdrawal from around Kyiv as it focused its fight in the east of Ukraine, life has seemingly returned to the streets of the capital with some out walking around the city and enjoying good weather.