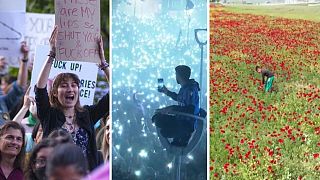 This week, people are coming together and reuniting.

To mark the end of the Holy month of Ramadan in Gaza City, and elsewhere.

To celebrate the victory of the Trabzonspor football club in Turkey, a victory that has been awaited for 38 years by the supporters.

Or to protest, too, against an amendment that could see the end of abortion rights in the US.

People are getting together, like this newly married couple, whose wife, Oksana Balandina, lost both her legs after stepping on a landmine in Ukraine.

People are sometimes also found, like this boat of Haitian migrants, off the coast of Tortuga.

And the rhythm of the seasons takes, bringing touches of colour to Syria.