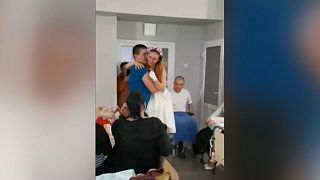 This is the moment newlyweds Oksana Balandina and Viktor Vasyliv shared their first dance in a ward at a Lviv hospital.

Balandina, a 23-year-old nurse, lost both her legs after a landmine exploded near her in eastern Ukraine on 27 March.

The couple had been walking home on a "familiar path" in the city of Lysychansk, in the Luhansk region, when Balandina turned to warn her partner of the danger. Moments later a mine exploded. Vasyliv who had been walking behind her was unharmed.