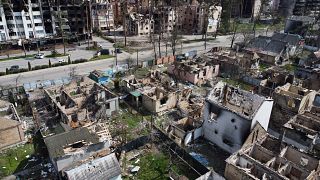 Annual commemoration of the dead in Ukraine

People across Ukraine are visiting cemeteries to remember the dead. Ukraine marks the commemoration day a week after Easter.

This year has been especially poignant.

Thousands of people fell victim of the Russian invasion.

In Irpin, a city on the outskirts of the capital Kyiv, there are dozens of new graves.

Civilians and military killed when Russian troops advanced on the city are buried at the local cemetery.

Ukrainian authorities have accused Russia's departing forces of committing war crimes and leaving behind devastating scenes in Irpin and other towns surrounding Kyiv.