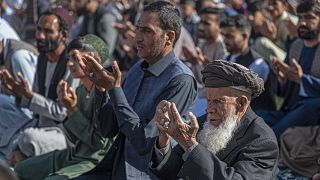 Muslims in Afghanistan celebrate the Eid al-Fitr holiday, marking the end of the holy fasting month of Ramadan.

Hundreds of Kabul residents packed mosques around the city to take part in Eid al-Fitr prayers.

Worshipers joined the Eid prayers despite fears of possible explosions.

"It was coming to my mind that God forbid some blast might happen," said worshipper Najibullah Khan at the event.

IS has stepped up its attacks across Afghanistan to become the primary enemy of the Taliban since their takeover of the country last August.

Despite Taliban claims to have routed IS from its headquarters in eastern Afghanistan's Nangarhar province, the militant group's renewed assaults on mosques, schools and buses underscores the intransigent threat it poses.