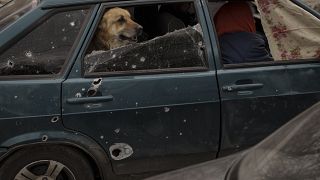 The village had been under Russian occupation for more than a month.

Almost half the village escaped in buses, in shrapnel-damaged cars or on foot, after fierce battles saw Russian troops pushed back and Ukraine take full control of the village, according to the Kharkiv regional governor.

Upon arrival to Kharkiv, less than 20 kilometres away, those who fled described the dire conditions they faced.

"We were hiding in the basement, it was horrific. The basement was shaking from the explosions, we were screaming, we were crying and we were praying to God," said resident Ludmila Bocharnikova.

Getting a full picture of the unfolding battle in the east has been difficult because airstrikes and artillery barrages have made it extremely dangerous for reporters to move around.

Both Ukraine and the Moscow-backed rebels fighting in the east also have introduced tight restrictions on reporting from the combat zone.