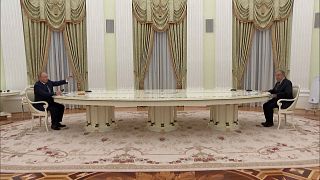 Beijing is enforcing mass testing to contain a new COVID-19 outbreak.
North Korea broadcasted images of a vast military parade to celebrate the 90th anniversary of the founding of the country's army.
A historic monument of Ukrainian and Russian symbolising friendship was removed from the Kyiv city centre on Tuesday, two months after Russia invaded Ukraine.
More graves are dug in a newly cleared area of the Bucha Cemetery, in the Kyiv region of Ukraine.
Russian President Vladimir Putin held talks with UN Secretary-General Antonio Guterres on Tuesday at the Kremlin Palace in Moscow.
Sirens blared across Israel early Thursday as the country came to a standstill in an annual ritual honouring the six million Jews murdered during the Holocaust.