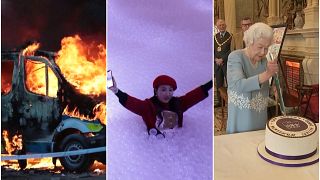 In Sweden, three people were wounded by ricochets of warning shots during violent clashes between police and protesters opposed to plans by a far-right group to publicly burn copies of the Koran, following a fourth consecutive day of unrest.

Clashes erupt between Israeli forces and Palestinian demonstrators during a protest against a march by Israeli settlers demanding the re-establishment of a nearby settlement evacuated in 2005, near the village of Burqa, west of Nablus.

As the fighting continues in eastern Ukraine, the besieged southern port of Mariupol has seen some of the greatest sufferings during Russia’s invasion. On 16 March, around 300 people were killed when a theatre was destroyed during the relentless bombardment of the city.

Tributes were being held on Thursday to mark Queen Elizabeth II's 96th birthday. This birthday comes during the queen’s platinum jubilee year, marking her 70 years on the throne.

Sitting on an inflatable sofa, diving into a ball pool... Inflatable art is at the heart of the immersive and playful Pop Air exhibition, presented over 5,000 m2 at the Grande Halle de La Vilette in Paris.

Cleanup operations were underway after deadly floods hit parts of South Africa’s KwaZulu-Natal province at the beginning of last week. NGO Clean Surf Project has taken it upon themselves to start the lengthy cleanup efforts near Durban.