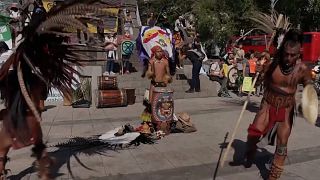 Mexico and Argentina celebrate Earth Day with dances and protests

Mexico and Argentina celebrate Earth Day with dances and protests

Demonstrators gathered in Mexico City's central Zocalo square where they called for justice for environmental campaigners and land defenders who had disappeared or been killed.

Elsewhere, people danced and played percussion instruments to demand a state of climate emergency be declared in Mexico, with traditional Aztec dancers performing to honour the Earth.

Argentine environmental groups took to the streets of Buenos Aires on Friday to commemorate Earth Day 2022, claiming for public policies to help reduce the impact of climate change.

The thousands of demonstrators, most of them young people, advanced toward the National Congress.

The protesters also called for legislation to protect wetlands, which are constantly endangered by fires and illegal cattle ranching.

Argentina has one of the largest wetland systems around the Paraná River.