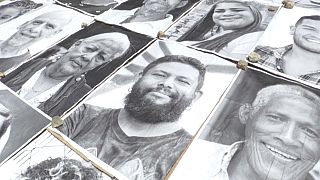 600 portraits show another face of a violent Caracas shantytown

A total of 632 black and white portraits of inhabitants of the San Blas sector of the huge Petare slum complex in Caracas were exhibited on Tuesday with the aim of showing another face to the violence that characterises the area.

The 3x2 metre images, taken by 20 Venezuelan photographers, are displayed on a sports field, in a small square and on some of the walls of San Blas, among the exposed brick houses built anarchically on the mountainside of what many claim is the largest favela in Latin America.

The travelling exhibition was organised by French street artist JR's NGO Inside Out.

"The idea is to try to get the good out into the world," explained French photographer Juan Calero, the project's director, who also signed some of the photos and worked with photographers from the neighbourhood itself.

"You only hear the bad things about Petare," he added. "This gives a positive image through art and photography."

Eilyn Gutiérrez, 40, said she cried when she saw her giant portrait on display. "I've never seen a picture of me as huge as that," the woman said, as she posed next to her image.

"The project is great to show that in this community, and in many others, there is a lot of talent for art," she continued. "The neighbourhood is not just the bad things it has, it's a paradigm. There are many good things, you just have to give yourselves the opportunity to get to know each other.