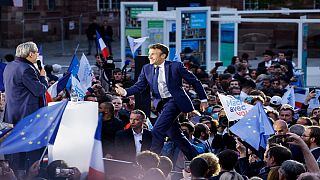 Macron stresses 'the difference between living in France and Hungary'

"You can shout, including 'down with the Republic' but you can do it. This is the difference between living in France, in Strasbourg, and living in Hungary!" says French president Emmanuel Macron to an activist who questioned him during his rally in Strasbourg, which ended a long trip to the east of France.

Emmanuel Macron defended his sudden softening of pension reforms he has pushed for years, facing accusations of a "ploy" to lure left-leaning voters from his far-right rival.

Macron held a long walkabout in Mulhouse as well, eastern France, where the president was beaten out by far-left leader Jean-Luc Melenchon in the first round of voting last Sunday.

Several residents assailed the centrist incumbent on pensions after he indicated the retirement age might be pushed back from 62 to only 64 -- instead of 65 as long promised.