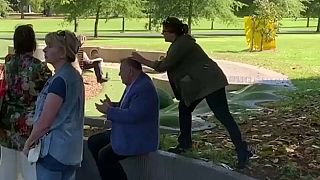 Filmed by the Whistleblowers, Activists and Communities Alliance, a woman smashed an egg on the head of Australian politician Craig Kelly in a Melbourne park during a rally on Friday, April 8, while accusing him of being a “Nazi lover.”

Victoria Police via local media said they were investigating.

The United Australia Party leader said on local radio that he intended to press charges. “If someone is able to get away with this act, no member of parliament can walk through the streets of any of our major capital cities freely without the concern about being attacked in such a way," he said.