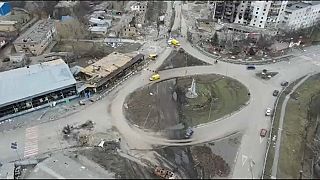 Widespread destruction was seen in a town in the Kyiv Oblast, following the withdrawal of Russian forces from the region, official drone footage released on Wednesday, April 6, showed.

The footage, released by the Ministry of Defense of Ukraine, shows destroyed civilian infrastructure in Borodyanka, a commuter town outside of the Ukrainian capital Kyiv.

Images and videos showing dead civilians in the town of Bucha led to a global outcry and accusations that Russia committed war crimes.

On Tuesday, Ukrainian President Volodymyr Zelensky said the death toll in Borodyanka “may be even higher” than in Bucha.