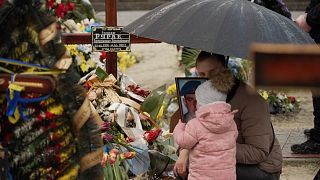 Ukrainian soldiers killed in action are buried in Lviv

Ukrainian soldiers killed in action are buried in Lviv

Burials of Ukrainian soldiers killed in action continued Tuesday at Lviv's Lychakiv cemetery as the death toll from the invasion mounted.

Burials of Ukrainian soldiers killed in action continued Tuesday at Lviv's Lychakiv cemetery as the death toll from the invasion mounted.

In the rain, dozens of relatives and friends of Ukrainian armed forces sergeant Andriy Kostiv, 37, and soldier Viktor Markov, 52, both recently killed in action, buried the men in solemn silence.

The latest victims of the war joined dozens of others who were recently buried here.

Among them was Volodymyr Rurak, 31, who died in the war on 14 March.

His one-year-old daughter kissed a photo of him at his grave on Tuesday, alongside her mother, Tetiana Rurak, 25.

There are no complete or official figures on the number of soldiers who have died since the Russian invasion of Ukraine began on 24 February 2022.