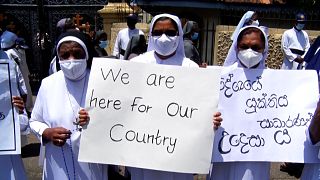 Sri Lanka's president lost his parliamentary majority on Tuesday as his former allies called for his resignation, following several days of street protests over the country's devastating economic crisis.

Severe shortages of food, fuel and other essentials, as well as record inflation and crippling power cuts, have inflicted widespread misery on the country, which is experiencing the most painful downturn since independence from Britain in 1948.

Public anger is at its peak: since the weekend, mobs have tried to storm the homes of several government figures and large demonstrations have taken place elsewhere in the country.